TOWARDS BETTER EQUINE WELFARE IN PORTUGAL

One of EEWA’s key objectives is to raise awareness of the equine welfare situation in Europe and support people that work to better equine welfare. In this report, we’ll offer you a chance to see the equine welfare situation in Portugal from a perspective of a civic activist Patrícia Pereira. Patrícia is the founder of a civic movement called Pelos Equídeos, which translates to “for the equines” in English. Patrícia has dedicated the past 1,5 years to the purpose of changing the Portuguese laws to protect the equines better, so she truly has a firsthand experience about this issue.

We met Patrícia in November 2019 when we were visiting organizations and people who work with equine welfare issues in Portugal and Spain. At that time, Pelos Equídeos was still collecting signatures for their petition which aims to guarantee the legal protection of the Portuguese equidae. Pelos Equídeos delivered the petition to the Assembly of Republic with 11,500 signatures of Portuguese people. If the petition succeeds, it will make a huge difference in equine welfare in Portugal.

The purpose of this report is not only to raise awareness, but also to ask equestrians all over Europe to show that we too stand for the rights of all equines in Portugal. Now, as the petition is handed to the Portuguese Assembly of Republic, we have a chance to raise our voices to give Portuguese equines a better future. Now is the right time to show that we don’t accept the ill-treatment and abandonment of equines that happens every day in Portugal. Things need to change. 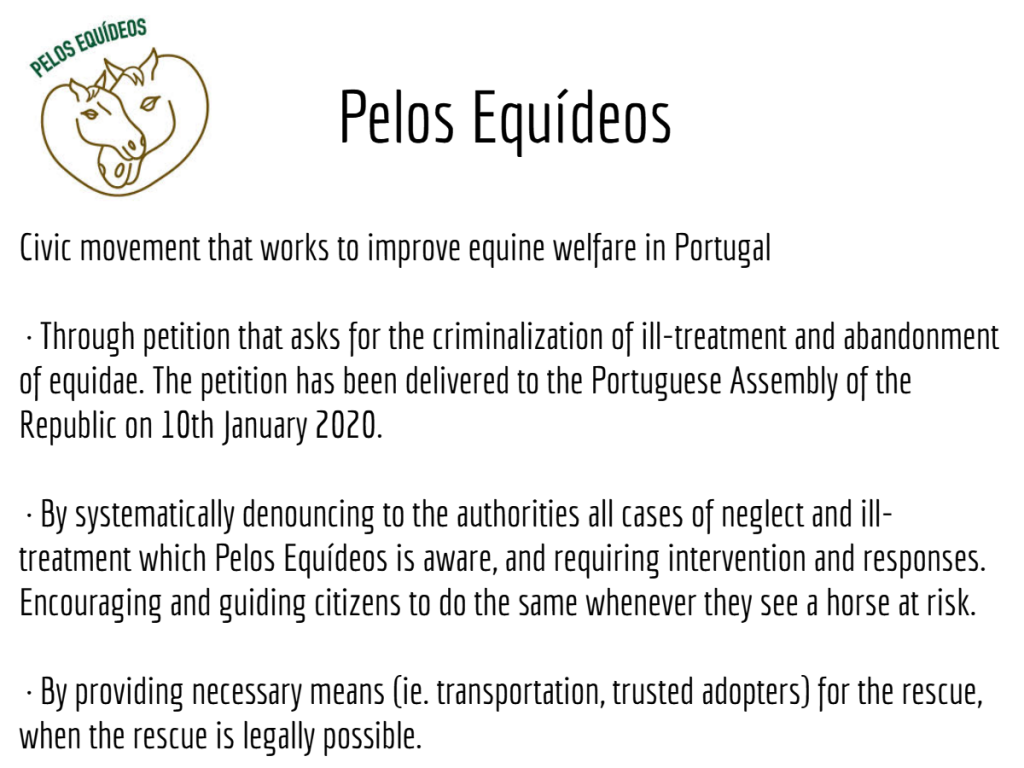 The equine welfare situation in Portugal from Patrícia’s viewpoint

Patrícia has now spent 1,5 years reporting cases of neglect and ill-treatment of horses and other equines to the Portuguese authorities. In short, she describes the Portuguese equine welfare situation as very dramatic and disastrous. She told us that from her viewpoint, Portugal is a country with two sides when it comes to equines:

“Portugal is a country with strong equestrian traditions, holder of the much admired Lusitano horses. The country organizes historic and stunning equestrian events. This “wonderful world” ends up masking the other side of reality, the dark side: the excessive reproduction with questionable control, the uncertain fate of foals that are born without the desired characteristics and horses that have ceased to serve the purpose of their owners. Many of these animals end up pulling carts until they collapse, or abandoned to hunger and thirst until they die, or in traffic for clandestine slaughter.”

In addition to this, Patrícia brought up people’s insensitivity towards equines. One example of such insensitivity towards horses and other animals is the tradition of bullfighting. For some, it might come as a surprise that bulls are not the only animals suffering from this brutal tradition. Horses are deeply involved too, since in Portugal the bullfighter usually rides a horse in the arena. This, of course, causes the horse unbelievable physical suffering – not to mention the stress and fear.

Patrícia also thinks that current laws are not protecting horses and other equines. She has faced many situations where the legislation has failed to protect the equines. She says:

”Current laws and enforcement methods are not discouraging to violence against equines and are proven insufficient in the effective protection of these animals. Usually the cases are extremely violent and still not considered a crime. The penalties are reduced to fines that are often not paid and cases are archived in the process.”

She also recognizes that the Portuguese authority doesn’t have the means to act effectively in order to protect horses and other equines:

“The lack of means: the absence of sanctuaries or appropriate places to receive equines, means that they are maintained with the aggressors. Most police stations do not have microchip readers, or even adequate transportation for horses.”

This means that despite the efforts of the rescuers, even violent cases of neglect can end up with the owner keeping the horse and receiving no consequences for the suffering they have caused. Often, the situation unfortunately doesn’t get any better over time.

BLONDIE - A HORSE THAT ALMOST GOT A BETTER LIFE

Patrícia tells us that even if a horse is clearly suffering or close to death, there’s not much you can do without the owner’s permission. She says that if someone rescued the horse without the owner’s permission, they could be accused of theft. According to Patrícia, there have been many unfortunate cases where the owners have refused to give the horse up. Many who work at rescue organizations report that this is the most devastating and frustrating part of their work; seeing a horse suffering and being unable to help it.

Patrícia gave us a devastating example of this kind of situation. In December 2019 they tried to rescue the horse in the shocking pictures  below. Patrícia doesn’t know the official name of the horse, but she and her colleagues call him Blondie. Blondie didn’t have a microchip and Pelos Equídeos obtained an authorization to rescue it. Pelos Equídeos arranged a vet, a transport and an adopter who agreed to rehabilitate the horse. Arranging all this took a lot of effort; the rescue operation involved several people who spent the night under a storm at Blondie’s side. However, Blondie’s owner showed up and the police handed him back to the owner. This is how Patrícia described her feelings:

“It is desperate to see the animal there, hungry, thirsty, often injured, and not be able to help it.  You make every effort, discuss with the authorities, and all without success.”

Unfortunately, this is only one example of many similar cases. It is also a clear example of why Pelos Equídeos is needed and why the importance of their petition can’t be emphasized enough. There needs to be a change in Portuguese legislation regarding horses and other equines.

NOW IS THE TIME TO ACT

The biggest goal of Pelos Equídeos is to improve the legal protection of horses and other equines through their petition. Patrícia sums up the key points of the petition as follows:

“The key points of the petition are precisely the request for criminalization of ill-treatment and abandonment, more inspections, support for associations dedicated to receiving equines and means for the authorities to act effectively.”

Patrícia believes that if the key points of the petition are reached, there will be a significant reduction in illegal activity. She believes that the owners of equines will change their behavior regarding the welfare of their animals, if the ill-treatment and abandonment of horses and other equines is criminalized. Patrícia and her colleagues believe the final decision regarding the petition will be made in the summer of 2020.

We also asked Patrícia, if there is something people living abroad could do to help. This is her answer:

“Yes! We ask people to be aware of what happens in Portugal with equines and to spread the word. We also ask that, as much as possible, they support our associations which do not have any government support. In addition, there are many equines who are victims of suffering waiting for a home. Consider adopting in Portugal.”

These are great pieces of advice for the rest of us. However, if you are considering adopting, please be careful! Make sure that you aren’t accidentally creating a market for malnourished equines: get to know the rescue organization properly and visit, if possible.

The importance of this petition can’t be emphasized enough, as it could fix many of the biggest problems related to equine welfare in Portugal. By sharing this report and posts concerning this issue, you are joining us on the mission of raising awareness and showing that we care. Now is the time to raise our voices, as it might be crucial in order to give a better future of equines in Portugal.